Recent events in the world have been stunning for people of color in America. Nothing in my mind has been more striking than the reaction to the events in Charlottesville, VA this past weekend.

A wanna-be Nazi drove his car into a crowd of people, killing one and wounding over a dozen more. James Alex Fields Jr. who wasn’t from Charlottesville or even from Virginia for that matter, was in town for a pro-racist funfest that had been billed as “Unite The Right”. Several groups, all loosely affiliated with nazis, the KKK, or a myriad of other white supremacist or “national socialist” causes had gathered to play their greatest hits. The crowd he tried to kill in terrorist fashion, was made up of a group of people who had gathered to protest against the racists who had rolled into town, to voice opposition to the hatred.

For most people of color, especially Black people, none of this was surprising.

Let me repeat that:

Not even the violence. We knew the potential existed. Hell, we expected it. Because there really is no group more prone to violence than a bunch of rednecks, redneck wannabes and redneck adjacents. I mean, these fuckers travelled TO Virginia armed to the teeth, many of them hoping for the violece to occur. They get off on it. They’ve read the Turner Diaries and pray for the race war to begin.

What is stunning for us is how ya’ll acted after it happened.

And by “ya’ll” I mean, “you all who are very obviously not fucking minorities so you’ve been living in this post-racial shell”.

Were you not listening when we pointed at Donald Trump and said, “That guy is a racist”?

Did it escape your notice that he stocked his staff with folks for whom racism and division is their bread and butter?

Have you not seen the fear of the faces of everyone who does NOT look like YOU?

Where the FUCK have you been?

The sheer depth of your obliviousness was driven home in the simplest way this morning, when my friend “V” posted this to her Facebook: 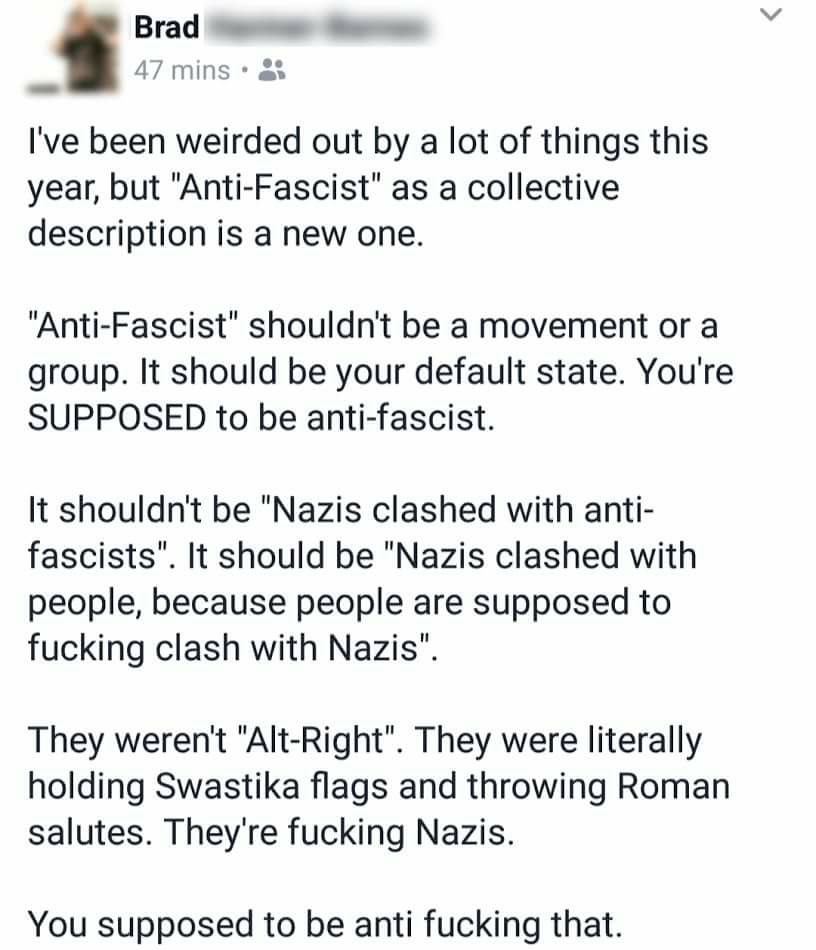 Seems pretty straight-forward, no? Then, one of her friends, who I do not know, responded with:

I am also confused about one other thing… did Trump lie about the violent lefties charging with clubs etc?

Are you fucking serious? Have you gone so far down the river of obliviousness that you think the polar opposite of “nazis” is “lefties”???

Let’s get one thing straight:

The opposite of “nazi” is “everybody else”. Or at the very least, “not a nazi”.

They have done such a good propaganda job of convincing the MSM and YOU that “alt-right” is what they are, that you have begun to believe it. Let this bullshit go. They are NOT “alt-right”. They are “racists”.

Even the “left” and “right” can agree on what a “racist” is.

How can @realDonaldTrump can show whose side he’s on? He can start by publicly calling this what it is: white supremacy.

No, not the same. One side is racist, bigoted, Nazi. The other opposes racism and bigotry. Morally different universes.

Their polar opposite is not “lefties”, “leftists” or “the alt-left” (which, contrary to what Sean Hannity and Marmalade Hitler think, does NOT even exist)

The opposite of “racist” or “nazi” is “everybody else”. And despite their attempts to use words that brand the rest of us as less than male (“cuck“), or “anti-facist” (which they shorten to ‘AntiFa’ to make us part of an actual unrelated political group) or “snowflakes” or whatever fucking term they want to use, the opposite of “them” is “us”.

The opposite of “nazi” or “white supremacist” is “every-fucking-body else”.