This pandemic has kept me within 10 miles of my house for the past year and a half. Not by choice…it’s just that my whole company has been remote since March 2020, and other than special occasions and holidays, I’ve really only gone to local stores and back home. One good thing that has come of this, is that I have gotten to know more of my neighbors than ever before…you know, other than the ones who live within a couple of doors of me, or directly across the street.

Many of the people in my neighborhood are also dog owners, so, I’ve met them via meeting their dogs…because dogs are awesome. And my neighborhood is about 99% white, and many of them are seniors….

So…yeah… I’ve gotten to know lots of old white people walking their dogs over the past year and a half.

Last weekend, after my typical Sunday morning grocery store trip, as I unloaded my trunk, two of these folks were walking past, a man (with his 2 little dogs), and a woman (with her little dog). They are walking slowly, casually, so I heard snippets of their conversation over several trips back and forth to my car.

On my first load of groceries I hear him, we’ll call him “Bob”, say, “Well, thats just how it is these days! They should be focusing on the important things like math and science…but the Liberals think Critical Race Theory is more important….”

I didn’t want to say anything. I’m the happy neighborly friendly black person, right? I have to keep in mind how folks see us. I don’t want to ruin it for the guy two doors down and his Black husband. Or the Black family up the street. I kept walking. I’ve got groceries to carry inside.

On my second load, I hear her, we’ll call her “Betty”, “I used to work for the school district, and they are cutting funding for things like Special Education and Music. I bet they have no problem funding Critical Race Theory….”

No. Walk away. Keep your mouth shut. This isn’t your fight. Today is not the day. You are not Negrodamus, high wizard of schooling ignorant white folks. WALK. AWAY.

On my third, and what I thought was my final load…damn…arms are too full to close trunk.

This will require one more trip. I hear Bob again, “…you know….Critical Race Theory is just a trick by Black Lives Matter to turn our children into Socialists….”

On my final trip to close the trunk, Bob says, “I have this one Black friend…known him since grade school…great guy…his kids went on to be in the Electricians union too…anyway…we were talking a while ago and he said he doesn’t understand why they want to teach little kids this Critical Race Theory stuff either…”

Lord God almighty, I think to myself, why do you TEST me this way??? What did I do to deserve this? Its a beautiful Fall day….sun is shining…I was in a GOOD MOOD, God….do I have to?

I close my trunk….

I reach a hand in my pocket and quickly withdraw it….

“Excuse me,” I call to the crinkly old white people with their crinkly old dogs, I wave what’s in my hand towards them as I walk in their general direction…..

“I’ve got $20 here. American currency. I’ll give it to either of you if you can actually DEFINE what ‘Critical Race Theory’ is. Seriously. Define it correctly, and this money is yours……”

See….thats the thing. All of these white people angry at “Critical Race Theory” don’t even know what the hell it is. They only know they don’t like it.

“Critical Race Theory” is a body of legal scholarship and an academic movement of United States civil-rights scholars and activists who seek to examine the intersection of race and U.S. law and to challenge mainstream American liberal approaches to racial justice. It’s LITERALLY a college level course on legal history. No one is teaching this to your kids down at the local middle school.

So every time I see these parents on TV bitching about not wanting little Johnny and little Becky to have “critical race theory” taught to their second graders, all I can think is…. “Do they believe that particle physics are being taught as well? Tort and Tax Law 101?”.

The fact is the GOP, the conservative Right and their news machines have deliberately turned the term “Critical Race Theory” into this incoherent assortment of things that have nothing to to with CRT, in an effort to target anything they feel might enhance, uplift or support black or brown people, or anything that might force them to come to terms with anything negative in our country’s past. We have, as a nation, created this vision of America as an unbesmirched virgin who has never done ill, or in those rare cases where her actions may be deemed ill by future generations, at least her heart was in the right place.

“Others might be confused and bewitched by the facts and passions of history, but my nation and myself have maintained and prehistorical innocence. Since the only good is this invisible quality that resides in us, the only policy is one that safeguards our innocence, regardless of the cost.”

The quote above is from Timothy Snyder’s “The Road to Unfreedom: Russia, Europe, America“, it’s meant to show the thinking of the Russian political philosopher, proto-fascist, and comic book superhero adored by Vladimir Putin, Ivan Ilyin, but, its not a huge leap to get from there to the thinking of the average MAGA member today.

The CRT that the Right is railing against is any examination of history in which “whiteness” is not only supreme, but also correct. We have to refer to Sally Hemmings as Thomas Jefferson’s “mistress”, because thats a term that we can kind of feel good about. “Mistress” has all of these wonderful feelings about it, like “love” and “choice”. Nevermind the fact that she was underage, he owned her, she was his wife’s half sister (because Jefferson’s father-in-law owned and raped Hemmings mother)…lets not discuss all that.

And the Right feels the same way about any “bad” parts of history. We’ve created this cultural mythos that should never be questioned, never be touched, never be examined. Confederate monuments. Christopher Columbus. Slavery. The treatment of Indigenous people. The interment of the Japanese. Jim Crow. These subjects shall not be broached! 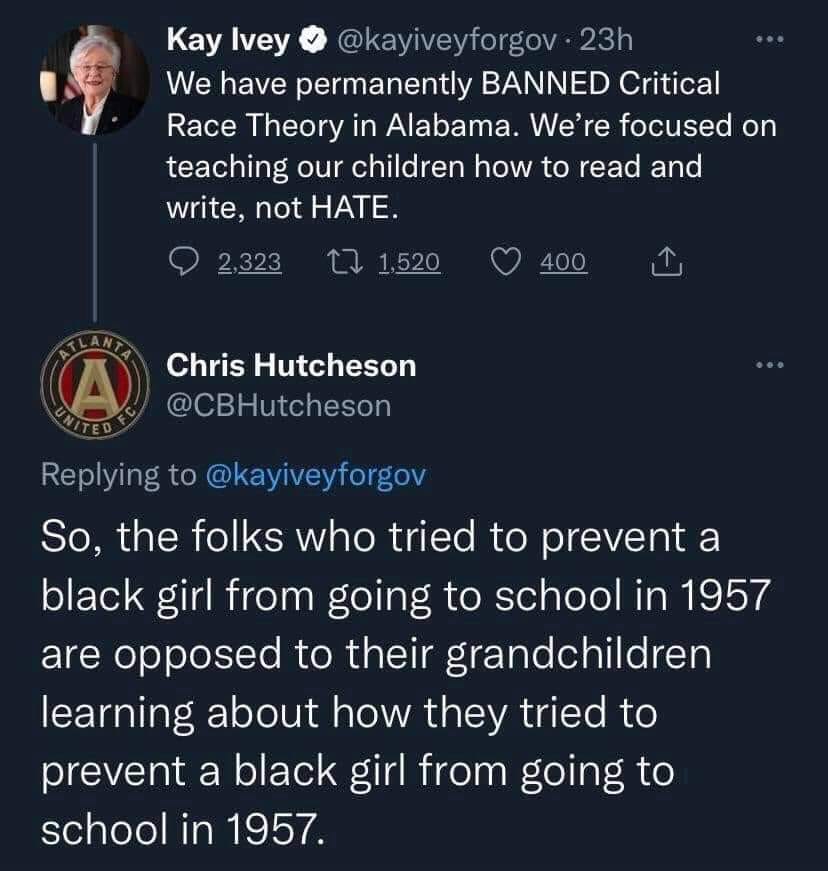 The exceptions to these are anything that helps the white folk feel better. Or even strangely, feel marginalized and put upon. Like the myth of Irish “slaves”. The stories of atrocities against Italian immigrants. Those are fair game…because “look we suffered too!”.

There is this concerted effort to never have white children feel guilt. Sure, their grandparents turned hoses on black people, made them drink from different water fountains, and strung them from trees…but they shouldn’t feel GUILT about that. (Which, when you consider the Christian faith is built on the idea of guilt becomes more laughable…..)

The denialism that causes these folks to lash out at CRT is, in my opinion, all based on FEAR. Fear of having beliefs challenged, fear of finding out you are wrong on a subject, fear of having the truth destroy history. Many Americans “sense of self” and civic pride is built on the history they were taught, filled with simplistic, positive ideas, as well as the myth that society automatically moves towards justice.

We’re taught that George Washington was the greatest of us, chopped down the cherry tree, couldn’t tell a lie, wooden teeth as well. This picture postcard story warms the heart, is easy to remember, and is fun to teach to our children and their children. So, the reaction to the truth: cherry tee never happened, told lies, had teeth made from the teeth of his slaves, and was such a horrible slave owner that other slave owners remarked on it. Its hard to reconcile the idea of such a horrible person ALSO being the “father of our country”. This is the same for Jefferson, Adams, Lincoln….all of these historical American figureheads. Thus = FEAR

Betty and Bob had no answer for me. They tried, they really did, going down meandering paths that included terms like “socialist”, “Black Lives Matter”, “Antifa” and “liberals”…but they had no true idea of what “Critical Race Theory” actually is…and they had no concrete idea of even what THEY thought it was.

Luckily I bought nothing frozen that day, because my groceries sat on my counter for well over 40 minutes as we talked, mostly peaceful (Betty and I) and occasionally heated (Bob and I). Along the way I saw Betty begin to realize maybe she had her facts wrong….and I saw her also realize that maybe Bob is a bit of a fucking racist. In an effort to tie CRT to socialism and socialism to everything bad in the world, Betty asked, “Well..don’t you think the world is getting more and more socialist every day?”.

I looked at her and calmly said, “In what way? Where is the socialism? Is it really socialism? Or is it just giving a damn about your fellow man?”. I went on to say that if helping those less fortunate than I is socialism, I’m all for it. If making sure kids get fed, get educated and have a roof over their heads is socialism? Count me in. “Or is it just that you only want socialism that you LIKE and that helps YOU?”, I asked her. She was puzzled. “When your house catches fire, and the fire department puts it out….you don’t get a bill. That’s socialism. When your house is broken into and you call the cops they come free of charge. That’s socialism. I guarantee that the social security check you get each month, regardless of how paltry you make think it is, is far more than you paid into it each month when you were working. Socialism.”

“Yes, Bob.” I answered, “But, you get more back than you paid in. On top of that….those ‘illegals’ you were talking about a second ago? The ones that have real jobs with real paychecks? They pay into it too…and they never see a dime of it back. Socialism.”

Bob, to his credit, stuck to his racist tropes for most of the conversation, the sad fact being that he’s a fucking racist, doesn’t realize he’s a racist and would probably tell you about his Black friends while trying to convince you that he actually isn’t racist….this while also trying to explain that the Europeans must be inately better because look at all they’ve accomplished and look at the shitholes these third world countries are. I challenged him on this, explaining that the Europeans turned them into shitholes…but, his feeling is, “Yeah…but they arent there now. So how come those people arent doing better?”

White folks don’t ike Critical Race Theory, their version of it not the real one, because it causes them to see themselves as fallable humans. It lowers their standing in the world to the level of everyone else.

They will never SAY that out loud to you, but, they will say it in their actions. In their defenses against CRT.

Whiteness will always be their prime mover.

But, I think I got through to Betty a bit that day. 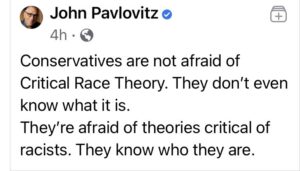 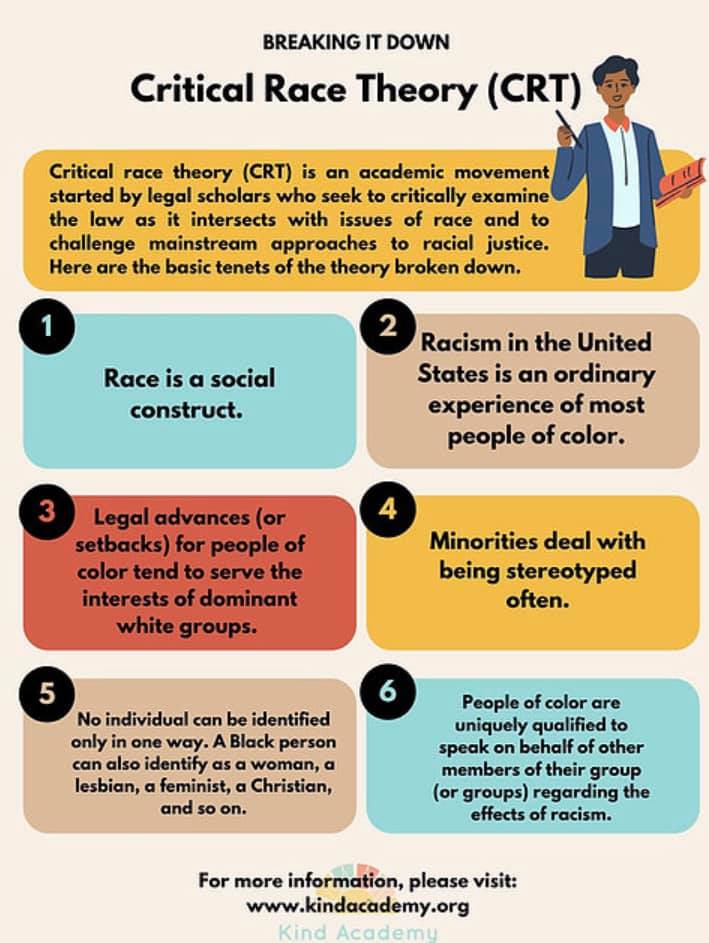