Yesterday, a good friend posted the following meme on Facebook with the words, “Fight me on this. I dare you.“.

He’s a good friend, whom I care about, so I was tempted to just move along. We sit on opposite sides of the political spectrum, he and I, but, we share a lot of commonalities: A love of heavy metal, a passion for beer in damn near all it’s forms, a solid get it done and stop complaining work ethic, and a love for playing the BASS.

But, he is, for all intents and purposes, a good ol’ boy from Oklahoma. And he wears the trappings that come with that… conservative, MAGA supporting, rebel flag waving, etc. (even though he’s a minority…don’t get me started)

I’m a reformed Colorado country boy, reared (and some would say ruined) by decades of living in the urban / suburban Northeast. I’m more progressive, scorn Trump and hate the damn rebel flag.

This is one of those rare instances where two people can be diametrically opposed politically, but, simply agree to disagree in a civil manner. Too often this doesn’t happen. I’ve lost friendships since the election of Orange 45. People I trusted, admired, and considered both friends and colleagues are simply dead to me now. It’s better that way.

So when my Sooner friend posted this meme, I just let it go. 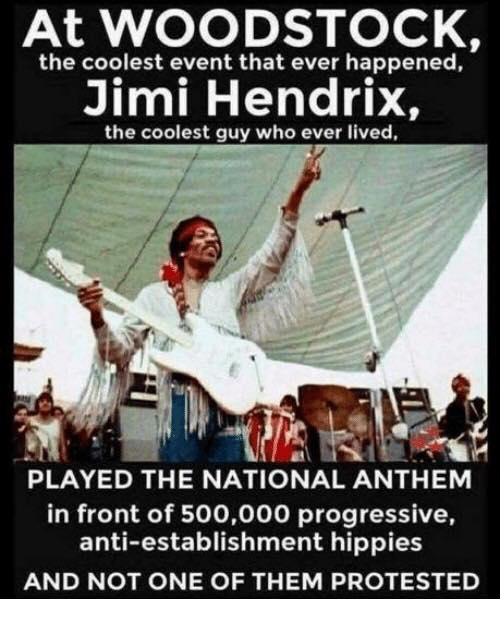 And on my drive to work, my brain simply wouldn’t let it rest.

Fight me on this.

That’s what he said.

Memes like this are tailor made for the MAGA crowd. They can both hearken back to a past era “when things weren’t fucked up like they are now”, and provide confirmation of their belief system without challenging them to think. Cognitive dissonance given a pop culture single serving form.

It scares me because this is the face of the nation we expect to constructively evaluate Darth Cheeto before the next election. We expect these folks to to make an informed decision when they pull that polling lever.

We want them to look at the dude they elected, examine his 4 years in office, check his promises against his results, and figure out if he deserves to keep the job. We expect them to see through his rhetoric and grandstanding, to find the substance.

When they can’t even see the idiocy in a single meme.

The point of these meme is simple, even if THEY don’t admit it:

“Look at this famous black dude, who we think is awesome which proves we like black people, playing the national anthem in front of a crowd of leftist snowflakes. He isn’t kneeling like Kaepernick, who clearly hates our troops. And the left isn’t protesting. This is back when America was great! Let’s make it great again! Fuck yeah! ‘Merica!”

Except…this is utter and complete bullshit.

Lets break this down….

The first part it calls Hendrix “the coolest guy that ever lived“, but in the second part it mentions “progressive, anti-establishment hippies” as if that is an insult or a description worthy of scorn. But…. Hendrix WAS an anti-establishment hippy. He was literally part of the group you are scorning…this is why he was playing music for that group. So how can he be “the coolest” while also simultaneously being part of the group that is being scorned?

They ignore the fact that this is revisionist history at its finest.

At that time, THAT man, playing THAT song, in front of THAT crowd?

IT WAS A PROTEST.

Sure, Hendrix said in later interviews that he didn’t mean it as a protest, that, “I’m American, so I played it. I used to have to sing it in school, they made me sing it in school.” But, Hendrix also wasn’t a fool. He knew that he was saying “I, too, a black man who served in the military and grew up in this country am an American. Despite what the establishment says.”

This fact was lost on no one who lived at the time, no matter how we want to sugarcoat it today. We seem to have forgotten that Hendrix spoke out against the Vietnam War, that he spoke out against police brutality.

The likes of Ted Nugent and Zakk Wylde have come along and played the Anthem on guitar since then, in a style that imitates or pays homage to Hendrix, and fans have yelled “Fuck yeah! ‘Merica!” and it’s now considered very patriotic….but at that time, it was received by the “establishment” as the equivalent of Colin Kaepernick taking a knee. As time has gone on, it’s been reworked to fit into this ideal of acceptance. It’s become a symbol of pride to the pickup truck driving, cowboy hat wearing, good ol’ boys. And they’ve forgotten that people just like them were hella pissed at Jimi for playing this song in this manner.

But, since this meme was created by the same folk who pine for a non-existent time back when America was somehow “greater” than it is now, this is all to be expected. (This is just like the folks who look at Black Lives Matter and say, “They should be more like MLK!” as if MLK wasn’t the most hated man in America when he was alive who got jailed 29 times for doing the exact same things BLM is doing now….) IJS

“In fact, when he took to the stage at 9 a.m., the crowd, which once numbered 500,000, had dwindled to fewer than 200,000. With the demands of work and school weighing on them, many fans waited just long enough to see Hendrix begin his set, and then departed.” (source)

And one final bit before I go…how can Woodstock, a concert populated by “500,000 progressive, anti-establishment hippies“, also be the “coolest event that ever happened“?

I’ll run off and ponder this and other things….all while hoping the folks that share memes like this one day stop and actually THINK about what they are saying.

I’ll try and make a snowball survive in Hell at the same time.