In a digital age filled with memes, DMs and quick hits from trolls, its easy to forget that words actually MEAN THINGS. We get so caught up in what was once called l33tspeak, with our LOLs and J/Ks and IDFWNWFWNIDFW, that we lose sight of paying attention to what people are actually saying, the words they use and the meaning behind them.

This is a game we have watched far too many times since the day that did NOT “contain the largest audience ever to witness an inauguration, period, both in person and around the globe”, despite what a certain dancing boy might have claimed. Perhaps that is when this started? Drumpf and his cronies have been telling lies, falsehoods, fabrications and even making up terms that don’t exist since the day they arrived in Washington.

So, it should honestly come as no surprise that we no longer even notice the bullshit. We’ve become numb to it. Inured.

And therein lies the danger. 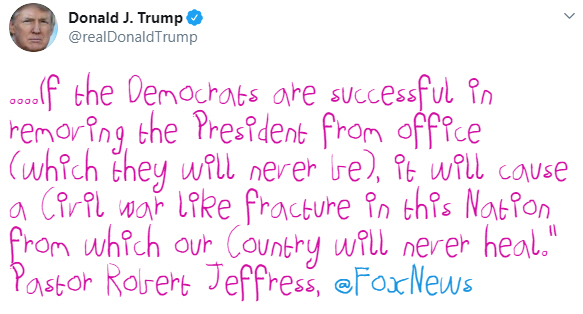 Over the past week, Marmalade Mussolini has been throwing around the term “civil war”, as if it were nothing. He has stated, quite plainly that if he were removed from office, “a civil war like fracture” would ensue. Nevermind the fact that he may have broken the law, and that is why the, up until now, ineffective Democrats have done nothing but hand wring and wince a lot.

Despite the fact that this is most decided NOT a coup….this is a legislative investigation. An investigation to determine if laws were broken. A “coup” is a VIOLENT takeover of a government. A simple glance at Oxford shows this. The two terms dont even kinda sorta mean the same thing. (Newt should probably look that shit up.)

But, today, 46minus1 used the term in his own tweet. Either he’s simply mimicking Newton Leroy, which I believe, or he is dastardly enough to understand its significance and simply doesn’t give a shit. Either way Orangina using violence and violent terms in his rhetoric is NOT something that should be ignored.

At best, Newton Leroy and “The Don” are simply to inane to realize that violent rhetoric leads to violence….at worst, they are trying to get their base good and frothy ahead of the fight. Either way, they are playing a dangerous game when they don’t pay attention to the words they use.

And we are in even greater danger when WE don’t pay attention to the words they use.

There is a sad and short history directly at hand here, of violent people hearing these “leaders” speak, and then taking it as a sign to perform an action.

And we may be watching it happen again….